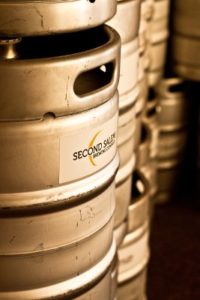 The name “Second Salem” comes from the early 20th century, when locals referred to Whitewater as “Second Salem” due to its reputation as a site of witch gatherings at the Witchtower (the Starin Park water tower), strange murders, unearthly creatures in the lake and other unexplained phenomena. South central Wisconsin is also the stomping grounds of the Beast of Bray Road, a werewolf-type creature that was sighted on numerous occasions in the early 1990’s and the Wild Man of La Grange, a strange character apprehended by local authorities in 1929. These strange events, figures and architecture are part of our collective past: one that makes our area unique, and one that provides a rich variety of stories to translate into extraordinary beer.

I am a first generation immigrant and Whitewater native. I started out washing dishes in my father’s restaurant, Novak’s Family Restaurant when I was about 8yrs old. Eventually I made my way up to short order line cook during the days and moon lighted as a pizza maker at my father’s pizzeria, Gus’ Pizza Palace. After I graduated UW – Whitewater in 2003, I managed Gus’ Pizza full-time. In May of 2010 I bought my father out of Novak’s with the intent to remodel the back banquet room into a pub. This was my opportunity to pursue my dream of opening a craft beer pub. The remodeled side of the building became known as Lakefront Pub and opened in 2011. Second Salem is the next step: to not only run the best craft beer pub for miles around, but also make beer that can compete with the best in the American craft scene. I also serve as a volunteer fire fighter and teach Brazilian Jiu Jitsu for UW -W Club Sports. I live in here in town with my wife Beth and our two sons.

I am a fourth-generation Whitewater native. I first drank craft beer while attending college in California during the West Coast’s craft brewing explosion of the early 90’s. My goals for Second Salem are to bring high-quality, locally-brewed beer to my hometown, and more broadly to explore ways we can contribute to Whitewater’s downtown revitalization efforts. A retired opera singer, I divide my time between Second Salem and The Coburn Company, my family’s wholesale farm equipment and printing business founded in 1925. I live in Whitewater with my wife Anne and our two children.